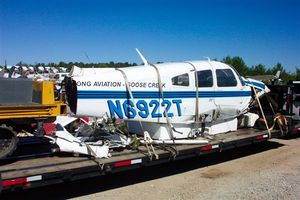 This comes less than a year after my primary trainer 4TK was crashed by another student. I don’t have all the details… but it seems that a 25 hour student took it out solo without checking with an instructor… (as is policy) or getting a weather briefing… and tried to land in 15-20kn crosswind when they were only signed off for 6kn. After a botched go-around.. they ended up in a cross controled stall about mid field at 100′ or so AGL… banked over.. sending them left of the runway.. and ended up hitting the trees nose down. At one point they were banked at about 90 deg.. and actually went off at a right angle to the runway.. according to a witness who was overflown during the accident. The plane is in several pieces… wings shorn off etc.. but the cabin held together and there was no fire. The pilot walked away with only bumps and scrapes… and from the pictures I saw.. they are very lucky to be alive after that little stunt.

You have to wonder what he was thinking… if he was thinking… I foresee changes coming in the policies.. and the control of the aircraft keys. At some level.. in learning to be a pilot you must leave some of the go / no-go decision making to the student.. but if a student shows the wrong attitude about this responsibility.. or shows little regard for safety.. then maybe it’s time to cut them loose and stop the training. In the end.. having unsafe people in the sky is bad for everyone. You have to know your limits.. and have a good feel for when things are not what you expected.

It’s really kinda sad to see both of these planes scrapped… During my training.. I would talk to people on the radio who had learned to fly in those same planes 15 and 20 years ago.. and now.. just a few months after earning my ticket in them… they are both gone. The only good thing is that neither pilot was seriously injured in these crashes.