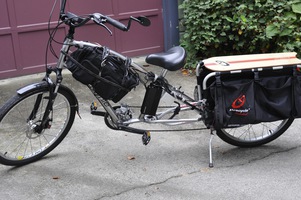 This is an update to my initial posting last July. It didn’t take long to figure out the lead batteries were not going to cut it for the sort of high performance bike I had in mind. So shortly after I moved I replaced them with a LiFePO4 pack from Yesa. I got this straight from the manufacturer in China at a considerable savings over other similar quality packs from retailers here. I can only speak for my experience.. but the guys at Yesa were top notch to deal with and after more than 6 months putting their batteries to work I’ve had no problems. The Li pack is lighter and I relocated it for better balance on the bike. With a fresh charge on level ground it can sustain 40… but 35 is a normal top speed once you get past the first few miles.If I had it to do over.. I might go with a 72v setup and a motor with more windings. That would allow for lower power draw but still ample speed when you need it. Continue Reading for more technical details..

It’s a 48v 20AH pack and with this motor (wound for speed) the power draw can range from 25-37 W/mi depending on what sort of riding you are doing.  If there is traffic I try to keep up so that results in higher average speeds and quicker acceleration and higher power requirements.  It’s not hard to achieve 25 W/mi, or better, by sticking to side streets with little traffic and keeping the speed under 20 or so. The long wheel base and low seating position makes it easy and comfortable to ride at speed and I’ve had no problems being seen by drivers.

By the numbers this pack has 960 Whr capacity so with a conservative (and kind) 80% depth of discharge that results in a range of between 20 and 30 miles depending on riding style. So far my trips have been between 4 and 6 miles round trip.  That covers trips to the grocery store.. the bank.. the post office and some excursions uptown.  At such a low depth of discharge that should make this pack last a good long while.  At 48v you need the 20AH rating though because it’s very easy to draw the full 40A my speed controller is rated for.  This again is where a 72v pack would a better fit electrically.. if not physically.. since that would reduce your current to a more managable 28A.  With that level you could go with a 72v 15AH pack and still be within it’s 3C continous rating.  Unfortunately Yesa does not have an off the shelf BMS or charger for 72v packs as yet.. and while you could rig something up with 2 36v packs.. there can be issues of uneven discharge putting them together in series since the separate battery management systems aren’t designed for that.