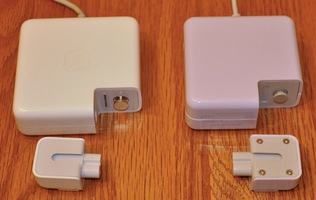 As part of a new project I needed a power connector for a macbook. Not wanting to shell out $65 for an official power supply just for the connector I picked one up from ebay for about $20. On first glance this looks like an apple power supply.. but something just seemed off about it. On closer inspection I found lots of things were different… this was clearly a knock off. Of course.. for my use I didn’t really care as I only needed the proprietary connector but I decided to do some testing and side by side comparisons just to find out.  First off.. there are no Apple logos or markings on this supply so it’s not technically pretending to be official.   The color of the plastic is a shade different.. it’s not white. The body has a sort of lavender tinge to it.. the removable plug has this as well but a bit lighter.   The under side of the removable plug has visible assembly screws (one with a stripped head) while the Apple one has none.  The ‘button’ the removable piece snaps over is metal on the official supply while it’s plastic on the import. The power connector on the official one is metal while the import uses silver colored plastic.  The knock off is noticeably lighter but I don’t know why that is without opening them both up.. which I don’t plan to do.  The technical info is printed in a different location and I am highly suspicious of the CE stamp and I note a missing UL (underwriters labs) stamp.  So if you used this power supply and it started a fire.. would your insurance cover it since this is not an ‘approved’ electrical device? I checked the output with a volt meter and found that it was putting out the right voltage.. but that’s all I can say about the electrical quality of the power supply.