For those who don’t know.. As a nation we have essentially decided to give up our manned space program.  While NASA has done amazing things with robots and satellites in space the one aspect that really captivates is manned exploration.  As with most huge projects, things haven’t exactly gone as planned with the shuttle or space station over the last 30 years. But now as reality sets in and we see the ending of the shuttle program it strikes me as a milestone that the United States will not have a way to get people into space forcing us to rely on the cooperation of others (who are not our friends) to do so.  I wanted to share a few things for those who are interested.

Read more…
My pilot controlled lighting box is done and will be installed sometime after thanksgiving at Goose Creek. As designed.. the system uses a small mic placed near the FBO radio to listen for seven radio clicks in a 10 second period… and it then turns on the runway lights for 15 minutes. This was my first project built around a basic stamp.. and that part of it was pretty cool. I am considering making some improvements to this setup and trying to market it to other small/private airports.
Read more…

Read more…
Over the last two weekends I’ve tempted fate by doing some day-to-night transition flying into the goose… my first solo night flying. With any other airport night landings are a non event to me… no more or less difficult than during the day… but goose creek is Not any other airport. The runway lighting consists of twenty 40 watt lights in glass jars along the 2300′ x 35′ runway.. there is no beacon… and it is only lit all the way down on one end… so no matter what the winds are doing you have to land 22.
Read more…
I doubt most pilots I personally know would appreciate being called geeks.. but really… that’s what they are. Don’t misunderstand.. it’s not meant to be a negative label.. just an honest one. Another blog I read called Undefined Value is by a programmer and student pilot down in Atlanta. He recently had this to say about why there are so many techies in aviation: Underlying it all is a fundamental trust in technology and our ability to master it.
Read more…
The weather really sucks for flying this time of year… I’ve had to cancel four scheduled times in a row because of either storms in the afternoon or very poor visibility in the morning and at night. So it was nice to get back in the air today for another short cross country flight to Pinehurst. At this point I’m just trying to build some XC time.. so I can then start the instrument instruction… but I’m also building confidence in the Archer.
Read more…
Today marks 1 year since my intro flight with Tyson at Goose Creek… so of course I had to go somewhere if at all possible.. and lucky for me it was. I did my first X-Country flight in about 6 months.. and carried my first non-pilot passenger… and it was even her first time on a small plane. We took the Archer and did a quick trip out to Pinehurst… aka Moore County KSOP.
Read more…
I went up with Matt last night in the archer… I’ve not done any night flying since meeting the requirements back in Dec. It was a nice reminder of just how enjoyable night time can be… it’s cooler.. there are no thermals to deal with… and it’s a lot easier to see other planes around you. For anyone who is not familiar with flying the goose after dark I’ll do my best to describe the experience.
Read more…
A few delays aside… yesterday I went for the check ride.. and now I’m a newly minted official pilot.. of the private variety. So what this means.. is that the FAA considers me safe enough to carry any passengers who are crazy enough to want to go flying with me. Only about 2% of the population (US) has this privilege so that’s pretty neat. So who will be the first one to go fly with me?
Read more… 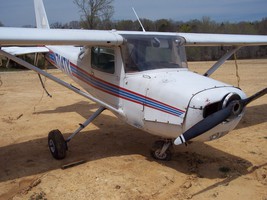 They hauled off the wreckage of N714TK the other day… this was the plane I did most of my primary flight training in.